Is Moving to Costa Rica a Dream or a Nightmare? 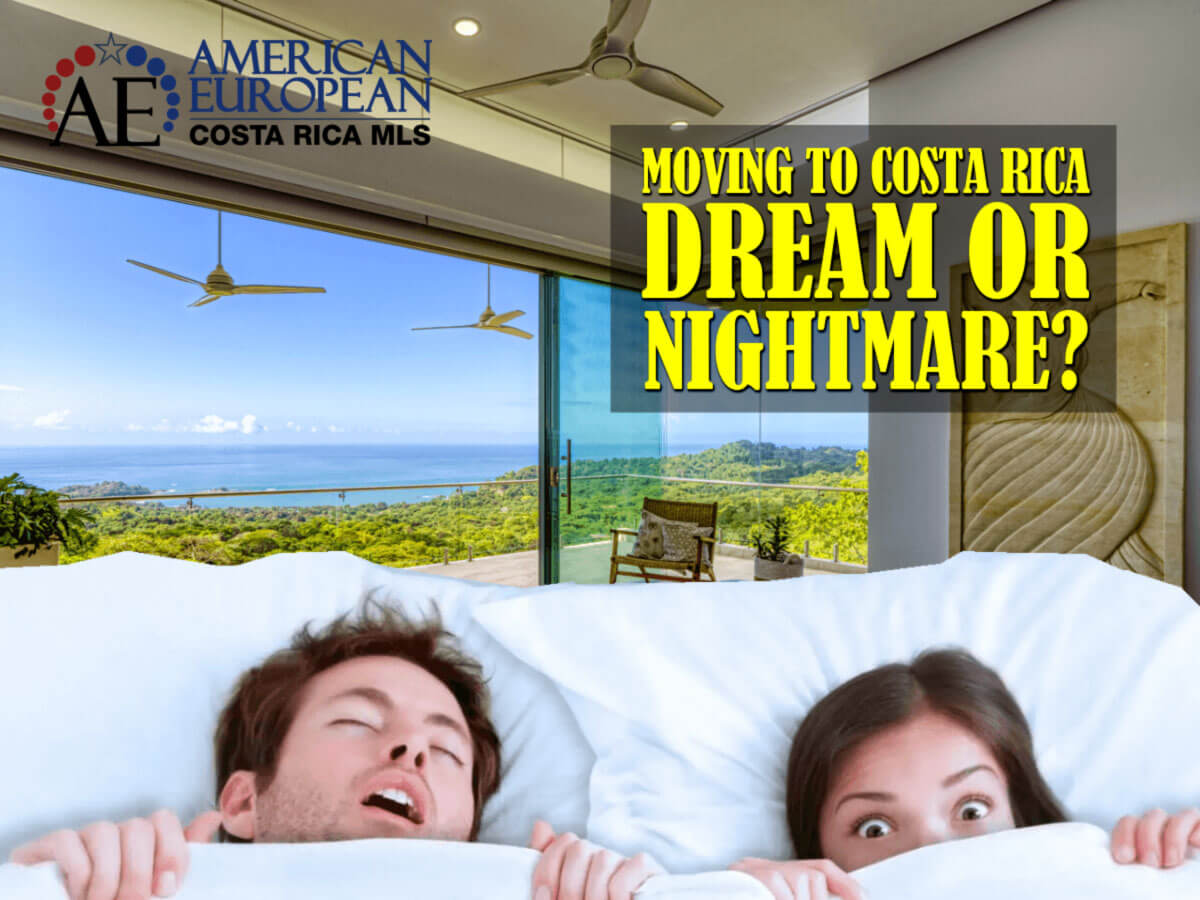 You have decided to move to Costa Rica and live that dream you have had for so long. You see yourself sitting on the covered terrace of your incredible new residence, sharing delicious piña coladas and bocas with your great company, as you enjoy the loveliness of nature or an ocean view. Or have a great cup of Costa Rican coffee on your terrace!

Is that a dream that can come true? Or will it only appear a dream for the first weeks or years, then turn into a nightmare?  If you’re renting, that’s an easy fix; you can walk away from your security deposit and move elsewhere. But when you’re buying, you really want to make sure your life in your dream home doesn’t turn into a nightmare.

Who doesn’t want to live in the tropics, in such a nice country as Costa Rica? It doesn’t matter if you’re moving here to retire, to start a business, or to work for a company, the first rule is to Always Do Your Research.

I’ll describe four dreams that were shattered because someone didn’t follow the rules of common sense: Don’t run before you can walk. Use your head. Don’t let anyone talk you into things you had not planned. Stay on track. And, Do the research!  The following stories of dreams gone bad are real ones. The first one is my own dad’s, in 1979 – 1980. 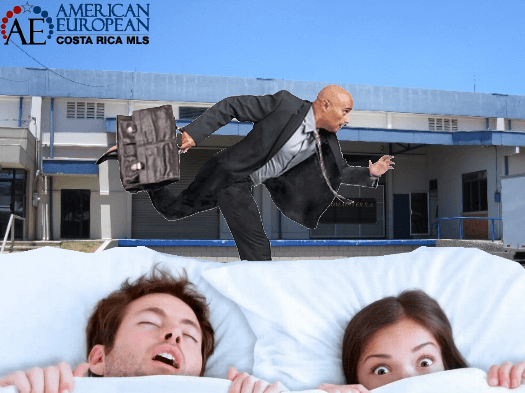 My parents made a two-week due diligence/vacation trip to Costa Rica with plans of retirement. Sitting on the terrace at the Gran Hotel Costa Rica, enjoying a coffee, they met a gringo, a very nice and amicable person. He was the owner of a spice and tea company and looking for a partner to grow his business. My parent’s dream was to have a successful business without hard work and enjoy retirement, and the man’s offer fitted their plans exactly.

Arriving back home, without doing any further research, my dad wired his new partner $30,000 to invest in the business. Six months later they arrived in Costa Rica to discover that all the money had been spent; my father’s new partner had put a new roof on his house and bought a new Harley Davidson.

Three years later, after trying hard to get the business going and to get along with his partner, my dad decided to walk away from his investment. Three years after that, their dream totally shattered, they moved to the Canary Islands. 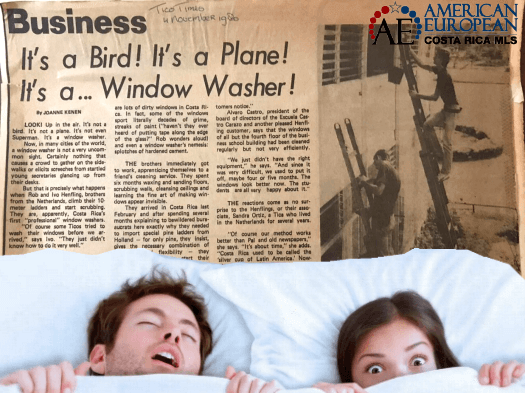 At about the same time our parents had moved to Costa Rica, my brother and I, 23 and 25 years old at the time, had decided we wanted to make the move with our parents. We both had pretty good jobs in Holland, but we didn’t have a clue what to do to earn a living in Costa Rica. We didn’t have much savings so, we put together a list of ten possible businesses we thought would be good, and sent the list with our parents. One of the businesses was a window cleaning company, and my parents thought it was a great idea because there were windows everywhere.

Our dream, just like our parents, was to have a successful business and a bright future in our new home country. Before leaving, and without any further research, we went into a three-month training period with a friend’s window cleaning company. Upon completion, we filled a shipping container with window cleaning equipment and sent it off to our new country.

Arriving in Costa Rica, without speaking a word of Spanish, we tried to convince the Tico business and building owners that they needed to clean their windows at least once a month. Ticos, however, were not interested in having clean windows. In short, after five years of hard work we lost our investment. But, in the process, we gained other important lessons: do your homework before you start a business and, if you don’t speak the language, prepare well before you make the jump into owning a business in Costa Rica. 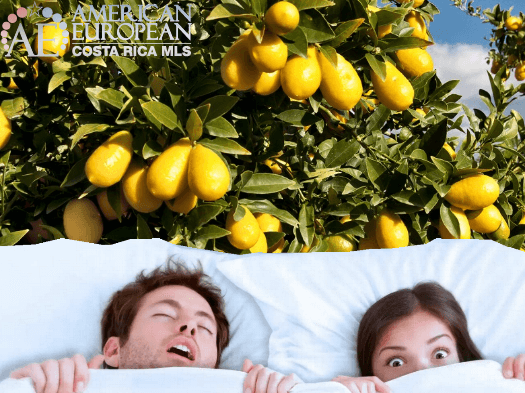 Some five years ago a couple called me; they were desperate to sell their home. They had fallen in love with, and purchased, a 27-acre parcel of land in Limonal, near Guayabo, a small town of 3,500 souls at the foot of the Miravalles volcano.

There they followed their dream to build a beautiful plantation-style home in the middle of nowhere. When the house was finished, however, they were bored stiff, did not get along with the neighbors, and hadn’t learned Spanish and therefore got screwed by their contractor. The property turned out not to be a lemon farm as the name suggested, but the name of the nearby village. The closed grocery store was a pulperia 20 minutes away.

When they called me they had ended up pretty much hating Costa Rica. “Please help us sell this property, we’re only asking $650,000!”

Today the property has still not sold and is now offered at $330,000 (let me know if you’re interested). Please, do your research, learn Spanish (and make sure you’re friendly with the neighbors.)

Memo, Willem in Dutch or Bill in English, was a divorced, ex-KLM airline manager, who retired to Costa Rica at age 65. He soon fell in love with a Tica and, at her urging, without further research into her history, married her. His dream was to be happily married and enjoying his retirement. Sadly, the Tica was greedy and hired two teenagers to kill him so she could inherit his estate sooner.

The investigations took over a year, and in the end, the wife was sentenced to 25 years in prison. The house, which was owned by Memo’s nephew, had been taken over by Nicaraguans who run it as a boarding house for their compatriots. Unfortunately, the nephew passed away before he could recover the house. The woman was released a couple of years ago.

Don’t let these stories deter you from your dream. Well over 60,000 expats from all over the world are happily living their dream here in Costa Rica. There are successful business owners, people working for others, or remotely from their tropical homes. There are also many, many retirees simply enjoying their lives in paradise.

I relate the above stories because they are examples of decisions that were big mistakes; a senseless waste of happiness, money, and life. And they all occurred because the people involved ignored the basic rules: Do the research. Don’t run before you can walk. Use your head. Don’t let anyone talk you into things you had not planned. Stay on track.

I often meet expats who are mad at everyone, except themselves; it’s “everyone else’s” fault they made the wrong decisions and think Costa Rica is a nightmare. Don’t be one of them. Do your research and inform yourself well before you make important decisions. And, if it involves the purchase of a home or property, hire an experienced real estate expert before you buy.

This article, by Ivo Henfling, was edited by Allen Dickinson and then published in the September/October 2020 edition of El Residente.

Latest Posts
Blog topics
PrevPreviousShould I Buy a Second Home in Costa Rica or use Airbnb?
Next10 Tips to Make a Smooth Long-Distance Move to Costa RicaNext
Go to Top