8 Rules on how not to get lost in Costa Rica 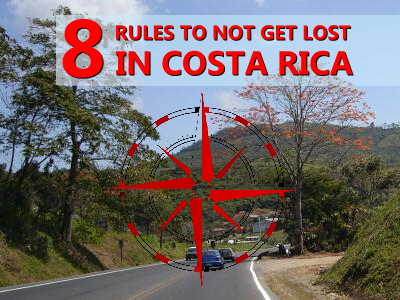 It’s difficult not to get lost in Costa Rica. Particularly when you are not familiar with the way we give directions here.

Few countries in the world use such directions. Instead, in most countries, giving an address involves a street name and a house number. Well, not in Costa Rica!

Here we have a very unusual way of giving guests directions on how to get to our house. But it works; you just need to get the hang of it, and you will not get lost in Costa Rica.

The fast way of sending someone a Costa Rica an address or directions to a place is to send a Waze or Google Map location. Nonetheless, thousands still use the old way of giving you an address.

The first thing any foreigner bought for their car when arriving in Costa Rica was a compass. But, of course, I’m talking about those that you can stick on the inside of your windshield. Like you do now with your cell phone. That’s because you needed the cardinal points to understand where the north is to find an address.

As you will see, the cardinal point system is essential to find out how not to get lost in Costa Rica. But, of course, you’ll first need to find out where la antigua Paco is. Let me help!

We use landmarks as a starting point and, from there, the cardinal points. More about landmarks below.

Paco, a famous landmark, was a doll factory in Escazu in the 1980s, owned by the Patterson family. Everyone in Escazu knew where the Paco was, so it was used for an address by anyone within a couple of miles. Next door was Trac-Taco, a retread tire factory. When the factory closed its doors, due to competition from China, Trac-Taco moved to San Jose. The owners of the real estate turned the two buildings into a strip mall, which became Centro Comercial Paco.

Of course, people could have started to talk about “Centro Comercial Paco” but memories seem to be important. Therefore the location became la antigua Paco and that’s what people still use to give directions here in Escazu.

In the old days, most businesses were at the same place forever. But nowadays few stay in business longer than 5 years. Therefore, Even if you find out where the Paco used to be, you will still need to find out where the north is to find our office if you do not want to get lost.

It would have been a lot easier to say: Carretera John F Kennedy, San José Province, San Rafael de Escazú, 10203, Costa Rica. The only thing missing is the house number, which we don’t have. That is how Google will give you our address when you check.

Do you know the way to San Jose

The streets in Costa Rica don’t carry a lot of signs. If you find one, it might be hidden or upside down and hard to figure out. So it’s not really something you can really trust to not get lost in Costa Rica. The lack of road signs doesn’t make driving in Costa Rica easier for you. Only the larger cities use the Avenue and Street sign system, such as used in the United States, although most signs are missing now.

Few corners carry street signs. You’ll also find street names that are invented by its neighbors, such as “Calle Perro Loco”. But if you put it on an envelope as an address, it might arrive, or it might not. Some municipalities have started to install street signs but nobody seems to pay attention to them.

I grew up with house numbers. Even numbers on one side of the street and uneven numbers on the other side. BUT, house numbers do not exist in Costa Rica either. Houses don’t carry numbers unless a homeowner uses an invented number to help identify his home. Here we use the color of the house, the gate, a column, a roof design, or we say it’s next to…

If you do not want to get lost in Costa Rica, do not count on using the street signs, or house numbers. 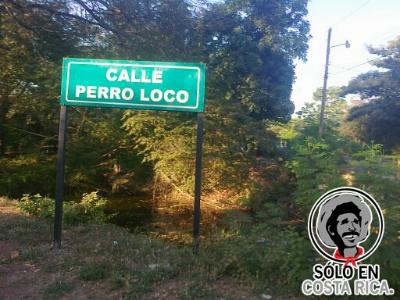 The lack of addresses

8 Rules on how not to get lost

I put together 8 rules you need to follow if you do not want to get lost in Costa Rica:

When you hit the ocean, no matter which one, you went too far. We have two, in case you didn’t know. Oh, and we’re not an island!

Get oriented by using the sun. Sunrise in the east, Sunset in the west. People have done it that way for centuries, so why wouldn’t you? 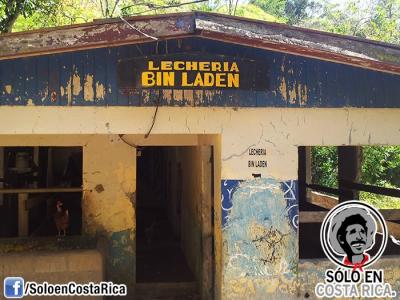 If you get lost, find a Catholic church. 99% Of the Catholic churches in Costa Rica face west. That will give you the right direction. Pray you won’t find the 1% that looks a different way.

If you are in a beach area, there is a good chance you will have a mountain range on one side and the ocean on the other. So there are not so many places to go to. If you can’t find your way out, drive in circles until you find someone who speaks your language and knows the area.

Learn basic Spanish, so you can ask the locals for directions. Do not always trust someone who speaks your language.

Costa Ricans give directions by giving you a landmark in a certain town or city and from there on using the cardinal points. Usually, these landmarks are a church, a park, or a well-known pulpería (small grocery store), maybe a place like Lechería Bin Laden as in the photo.

You will always be able to find a landmark in Costa Rica, still existent or not because everyone in town uses it. Although are called “antigua” which means it used to exist but is not anymore. Here are a few famous ones:

First, drive to the city or town where you need to go to. Once you arrive, ask for the landmark. On the way, check where the north is, so you will understand where to go from the landmark.

If you don’t know how to ask for directions, go one step back to #6. 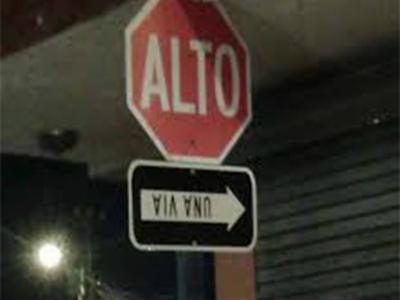 Which way is the one way?

If you don’t want to do 1 – 7, get yourself a GPS with Costa Rica maps on it or use Waze or Google maps on your phone.

There are a few other rules you will need to know when driving and not to get lost in Costa Rica:

Honk if you don’t know

Not all one-way streets have street signs telling you it’s a one-way street. Very few roads will carry a no-enter sign. If you’re not sure it’s a two-way or a one-way, drive carefully until you’re honked at, or not. 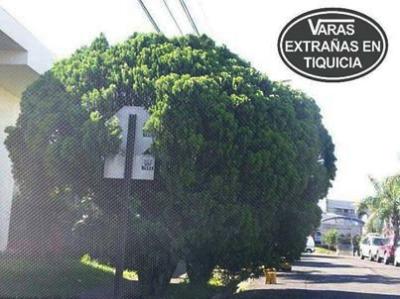 Smaller towns have two-way streets and very seldom you will find one-way streets except for downtown.

Highway 27 is used on heavy traffic weekends during vacation time as a one-way freeway. So ALL lanes, coming and going will be going in one direction only. There will be a barrier so you won’t be able to enter if you’re coming in the wrong way. Inform yourself at all times before using the 27 because you might drive from San Jose all the way to Ciudad Colon to find out you cannot go any further. Then you will have to go all the way to Highway 1 to get to Puntarenas.

With these hints and tips on driving and on how not to get lost in Costa Rica, we hope to get you started on your property purchase. Jus in case you decide not to use one of our affiliate agents. Of course, our agents will, besides selling you a property, assist you in a million other things when you move to Costa Rica. 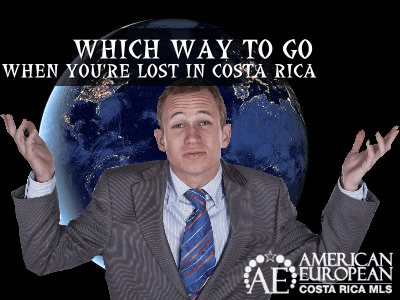 Which way to go when you’re lost? See 8 Rules on how not to get lost in Costa Rica