Can You Retire on Social Security in Costa Rica?

Is it possible to retire on social security in Costa Rica and live comfortably?

Retirees on U.S. Social Security, or Canadians on the Canada Pension Plan, seem to be attracted to moving to Costa Rica. (I too hate cold winters!)

I receive lots of emails from retirees in those two countries asking if they could live in Costa Rica on $1,500 per month. Their biggest issue is that many don’t have any life savings, are living on their pensions, and are looking for a warmer and cheaper place to retire.

So, can those people retire on social security in Costa Rica? The answer is: Yes, and No.

It depends on many things. Truth be told, living in Costa Rica is not so cheap anymore. So what it costs you to live depends on your requirements and your lifestyle. I know a lot of Ticos who live on less than U.S. $800 per month. But they usually have lower expectations of their day-to-day necessities than most expats do. Therefore, to determine the correct answer for you, it is very important that you do the homework. This is to determine how much your expenses for getting to Costa Rica will be, and what the cost of living here will be before you move. 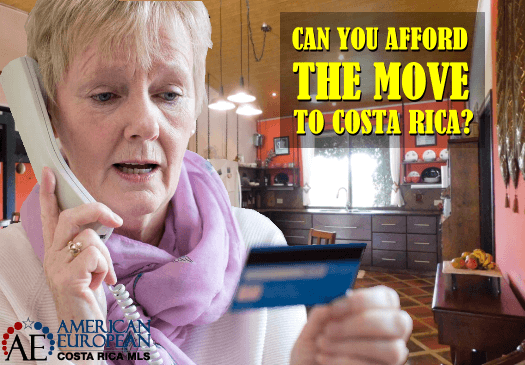 The quick answer is that if you are a single person and you work hard at finding ways to save money, you can probably live on that amount without any hardship. BUT, keep in mind that moving to Costa Rica is not the same thing as moving to Corpus Christi or Saskatchewan; moving to another country can be a costly affair unless you don’t have any belongings. Here are a few of the many issues to consider before you make the decision that moving is right for you.

The cost of the move is something many do not take into account. If you don’t have any belongings, if you just hop on a flight and buy new underwear when you get here, you need to remember that every item you need after getting off the plane and didn’t bring, will cost you. And the cost of many of those items may surprise you; the prices in Costa Rica can be the same, and often more than they are back home.

Usually, however, it’s not that simple. Most people have things they need or want to bring with them. So the key to what it costs to establish yourself here depends on what you feel you must bring with you. If it is going to be more than a suitcase or two, you need to determine what those additional items will cost to transport. But, if you retire on social security in Costa Rica you don’t want to live out of a suitcase.

In the extreme, bringing some or all of your household goods and belongings can run into thousands of dollars (including the import taxes you will have to pay.) So be very careful about what you decide to bring or not bring. 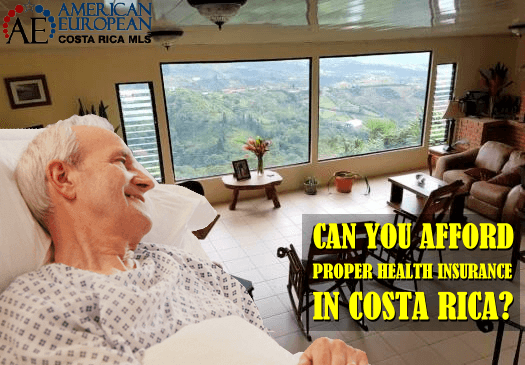 When you retire on social security in Costa Rica, having proper health care can be quite important. U.S. Medicare does NOT pay for health needs outside the U.S. Costa Rica has some of the finest hospitals and medical care in Latin America. And they are much less expensive than private care back home, but they still aren’t cheap, and without insurance, it’s “pay-as-you-go.”

So what about getting some health insurance?

1.       The first is the kind you purchase from an insurer. Granted, the health insurance you can purchase here is much cheaper than commercial insurance in North America, but it still costs money. (A few North American insurance companies will pay for treatment outside their home areas. Check with your insurer.)

2.       The second option is the Caja (CCSS – the Costa Rican social security system). It isn’t free either, but the monthly payments can be significantly lower. However, new laws allow only those who have applied for or have been granted residency, to join the Caja. (When you apply to become a resident you MUST join the Caja; it is mandatory.) However, don’t expect the Caja to be as prompt in dealing with minor ailments as the private hospitals – it has been known that getting treatment, even for a serious illness, through the Caja, can sometimes take months. It’s not the best, but it functions if you have plenty of patience and very little money. 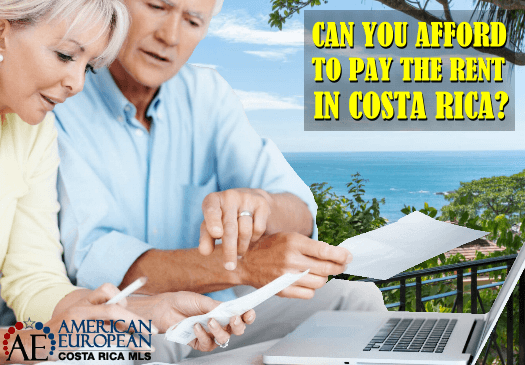 Housing in urban locations is much more expensive, particularly in the Central Valley than in rural locations.

Come visit before you make a final commitment to retire on social security in Costa Rica. Travel around and don’t stick to the gringo areas. Ask others who are already here for advice and find out which locations offer the amenities you favor at the lowest cost. There are great areas 20 or 30 minutes from San José or the beaches. And if you are on a tight budget, stay away from the areas close to a beach. They’re the most expensive.

If you want to rent when you first arrive (a strongly advised strategy for the first year) look for cheap rental housing on Spanish language web sites, like casa.todobusco.com. Or, there are some other great places to ask around for cheap housing, like the local central market, the local grocery store, and the farmers’ markets. To rent more upscale and gringo style housing, you can go to costarica.craigslist.org or contact us.

If you are inclined to purchase, there are many real estate agents available who can show you listings. But be cautious, many do not speak English, and most of those don’t cover low budget areas. Of course, I suggest that you contact us; we do speak English and cover some of the lower budget outlying areas such as Grecia and Naranjo.

Regardless, if you can’t find a suitable real estate agent, at least make sure you hire a reliable attorney before you put your money in the wrong place.

Water is still affordable in Costa Rica. And, there are many ways of being efficient in using it.

If you want TV, check which cable company offers the best internet and cable TV packages in the area you’re going to live. If you must have English language broadcasts, some channels are broadcast in SAP. However, if you want U.S. channels (ABC, CBS, and NBC) they are NOT available on the Costa Rican cable services right now. 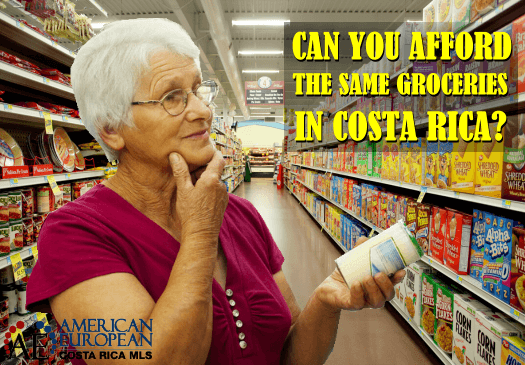 To save money on food, adjust to the local food and eat what Ticos eat; lots of fruits and veggies, rice and beans, and the products produced locally and in Central America. Foods prepared and shipped from the U.S. are much more expensive.

If you want to buy groceries cheaply, do NOT buy them in the pulperia (the mom and pop store in the neighborhood) or at a convenience store. Everything is more expensive in those small stores. Almost every town has a farmers’ market every weekend. You’ll be surprised how much cheaper the vegetables and fruits are there compared to the grocery store.

If you insist on buying your groceries in a supermarket, shop in the cheaper ones like Pali and Maxi Pali. The décor won’t be much to look at, but the prices are better than the up-scale big-box U.S. style markets. And if you like to save by buying in bulk, PriceSmart is such a chain. (They do, however, charge for membership.)

For cheap places for almost anything else, like household goods and some limited groceries, there are the El Rey and Pequeño Mundo stores.

Even when you retire on social security in Costa Rica, you’d like to look well dressed. If you can afford to travel, buy your clothing in an outlet mall in Florida. It’s much cheaper and the quality is better.

One alternative is the Ropa Americana stores here, which are located all over. These stores import bulk lots of close-outs, out of season, or unsold inventory clothing, disposed of by the big U.S. stores and chains.

Again, the presentation may not be the most attractive, but the prices can be phenomenal. Just make sure that the items you select are in good condition; it’s happened that damaged or soiled items have gotten mixed in with the “good stuff.”

Oh sure, it’s nice to have your own vehicle sitting outside waiting for you when you need it. But because every vehicle in Costa Rica has to be imported, and the import taxes are some of the highest in Central America, prices for vehicles, even those twenty years old, are very high; you can expect to pay at least double what the same vehicle would go for in North America.

Add to that the fact that gasoline/diesel is much more expensive in Costa Rica, and it begins to make sense to just hop on the bus. Costa Rica has an excellent bus system that goes to even the most remote places; it will take you anywhere and everywhere. When you retire on social security in Costa Rica you’re over 65 years old. So, you can travel the bus for free, by showing your cédula. Enjoy the ride! You’ll meet some very nice people along the way. 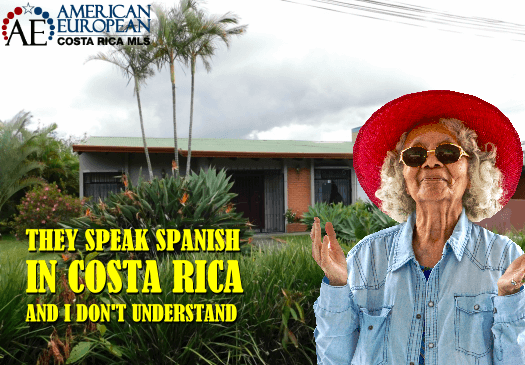 As I mentioned earlier, to join the Caja you must apply to become a legal resident of Costa Rica. There are several advantages to being a resident when you retire on social security in Costa Rica. But for whatever reason you apply, keep in mind that the application process can cost several thousand dollars. And it can take up to a year to be completed.

Something many people don’t take into consideration is that until they have applied for residency, they must travel out of the country every 90 days. And the advice for finding an honest, experienced, reliable attorney, mentioned earlier, is VERY important when it comes to applying for residency.

Ask around, get referrals, and be selective.

One last tip; you probably know that the lingua franca of Costa Rica is Spanish. You will find it a huge help to learn as much Spanish as you can before you move.

So, to answer the question, yes a person can retire on social security in Costa Rica. But unless they are financially “comfortable,” they may need to be prepared to change their lifestyle some. Maybe a lot.

This article, was originally titled Can You Retire in Costa Rica on $1,500 a Month? It was written by Ivo Henfling, was edited by Allen Dickinson and then published in the January / February 2019 edition of El Residente.

Several agents on our MLS do rentals, check here. If you have any other requests, contact us now.