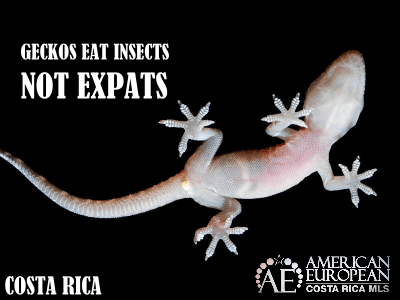 Geckos don’t need a residency card. Costa Rica has been host to thousands of foreigners who have settled here for four centuries (if one counts the Spanish.) But before the 1990s, none of them were able to scuttle across the ceiling like spiders.

That ubiquitous little Far Eastern lizard, the gecko, may have hitched a ride aboard a freighter (or a series of them) touching in at Costa Rican ports. However it happened, they found Costa Rican weather, abundant insects and houses just to their liking, thank you!

Today reports the newspaper La Nacion, the little lizards have multiplied and made themselves at home all across the country, to the joy of those who welcome a harmless ally to eat insects and the consternation of others who entertain a phobia about reptiles.

The former, reports the paper, have given their family’s gecko guests names and look upon them as pets–names like Antonio or Tomas, foreign ones like Fletcher, cartoonish like Rango or Juancho up to the exotic like Gaspar Le Gecko.

Through a combination of lightweight and “sticky” feet, they can climb smooth surfaces like window panes. Geckos can also lose their tails and regrow them. But, unfortunately, they are also victims of myths such as that they are poisonous, transmit disease (no scientific evidence supports that) and that they “urinate” a toxic substance. All xenophobic lies. 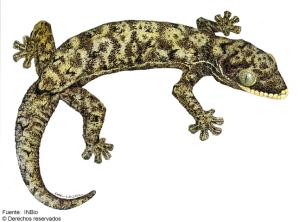 Less dangerous to them are things that only herpetologists know but the rest of us do not — for example, Victor Acosta told the newspaper that we have two separate species present and it takes an expert like him to tell the difference.

Besides being fans of the local climate, another factor favored their rapid spread — they breed, Acosta tells us unscientifically, “like rabbits.” The female of one species is able to store the sperm of a male in her body for eight months or so in order to lay fertile eggs when the conditions are right.

Another factor, La Nacion tells us, is that environmental changes made by man that has been disastrous for frogs and native lizards have allowed the more adaptable geckos to slide happily into the ecological vacuum those two animals left.

For example, in Heredia, the growth of urban spaces taking over coffee fields has all but forced other lizards and frogs into extinction. But the gecko gets along fine with most people and their homes harbor lots of food in the form of insects.

But what most sets apart the geckos from its silent local relatives is its “song,” described by the paper as a series of “cheeps.” It serves to mark territories of males and to attract females for breeding. It is the only scaly creature that has a voice except for large carnivores like crocodiles or some turtles.

But the most remarkable of the gecko’s accomplishments is its foot’s ability to interact with slippery surfaces on a molecular level. Some local small lizards do the same but with suction. Another unique feature, one that only an expert like Acosta would know, is that it is the only reptile to see color in darkness.

Numerous are the stories of the hunting prowess of the gecko. Dario Montero told La Nacion that “I observed a gecko killing a cockroach bigger than its head.” Another person told the paper of a “legendary fight” in which the gecko knocked a cockroach to the floor with its tail before skittering down and devouring it.

The salamanquesas (as they are known in Spanish) are at times clumsy and, despite their wondrous feet, do fall occasionally. One reader told La Nacion reporter Dario Chinchilla about the pair of mating geckos, obviously distracted, that fell on her while she was watching a horror movie on TV. Que susto!

But, then, even clean, sociable insectivores can have accidents. Whatever one’s attitude toward them, the geckos are here to stay.

And this is just not only on cable TV insurance commercials. We have yet to meet a lizard with an Australian accent.

When this reporter lived in Pavas years ago, we had a local lizard who lived in our patio de luz (central light well in the house.) We fed it wounded flies and called it Oz. (We’re off to see the lizard…).

Mr. Rod Hughes has a BS from the University of Oregon. He has worked in the Tico Times newsroom as a reporter. Later, he transferred to advertising and, briefly, shared co-direction of advertising. Some years later, before the Tico Times went digital, Mr Hughes worked part-time as creative director.